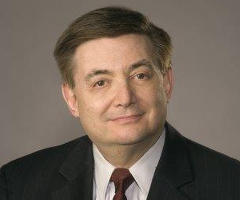 Rich Pollack is an Advisor at StarBridge Advisors, LLC. Rich has more than 40 years of health care management experience, 20 of which were focused on EMR success.

Rich served as the Vice President and Chief Information Officer for Virginia Commonwealth University Health System (VCU Health) in Richmond, VA from 2005 until recently.  Prior to that he served 2 years as the interim CIO for Clarian Health Partners, a $2 billion health system in Indianapolis, IN.

At VCU Health, Rich set the vision for IT, then authored and executed effective strategic and tactical plans that defined the best practice use of IT to support patient care and operational excellence.  Rich’s IT shop included a mature PMO with a unique Clinical Transformation Office. During his tenure, he successfully implemented Lawson ERP, GE revenue cycle, and Cerner EMR across all venues.

Rich was deeply involved in new facility IT design and construction in more than a dozen efforts, including the 15-story Critical Care Hospital.  He also focused on creating a data ecosystem for mature analytics and business intelligence.

As partners in the pursuit of “High Reliability” in healthcare, he and his team helped VCU Health achieve national recognition including the 2015 McKesson Quest for Quality, CIO Magazine’s 2008 CIO100 award, Information Management’s top 25 in IT, and HIMSS’ EMRAM Stage 6 designation.

From 1999 until late 2003, he was the VP & CIO at the University of Texas M.D. Anderson Cancer Center in Houston, Texas. In this capacity, Rich oversaw a 600-person organization with budgets more than $100 million, that supported all clinical, academic, research and administrative functions.

Prior to 1999, Rich served as Director of Information Systems for Nash Health Care Systems in Rocky Mt, NC.

Rich holds a B.A. in Biology, an M.S. degree in medical biology and certificates in Healthcare Management from the University of Texas and Harvard School of Public Health. He has presented extensively at national and regional meetings. He is a fellow of HIMSS, CPHIMSS certified, a fellow of CHIME, and CHCIO certified.  He serves on the VA statewide HIT standards committee, the IT Advisory Board for the VCU School of Business and is an Advisor to Scottsdale Institute.