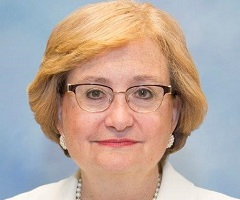 Karen is an Advisor at StarBridge Advisors, LLC.  Karen is an experienced clinician and IT leader in roles of increased responsibility over her career.  Karen has more than 40 years in healthcare.  Her first 20 years were spent in clinical nursing roles and then the past years in various roles in healthcare information technology.

Most recently, she served as the Senior Vice President for Information Services at Spectrum Health in Grand Rapids responsible for all aspects of IT for 13 hospitals and 100+ ambulatory locations and physician practices inclusive of all IT components with the exceptions of Security, Network and Infrastructure.

Over her career, Karen has worked for Intermountain Health Care as a Cardiovascular Clinical Nurse Specialist and for Ascension Health as Director Critical Care Nursing, Director of Clinical Systems and CIO.  She spent several years as a Sr. Director for Eclipsys. Inc. and was part of the team to implement EMR at The Methodist in Houston and University Hospitals in Cleveland.

Karen was one of the founders of Santa Rosa Consulting and while at that firm had several long-term engagements in EMR projects including in the New Brunswick southern province and a large system in Southeast Michigan.  She also served in a Southwest hospital system as an Interim Application Director.

Just prior to Spectrum Health she had been Interim CNIO (4 months) and Senior Director for IT Applications (4 years) at Michigan Medicine (previously the University of Michigan Hospitals and Health Centers).  At both Spectrum and Michigan, Karen was the IT senior leader responsible for the Epic system.