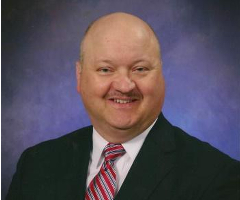 Randy has more than 30 years of information management experience with 23 years in rural healthcare serving as VP and CIO with responsibilities including telecommunications, biomedical engineering, business analytics, clinical informatics, strategic planning, and budget development. He was recognized as the CHIME-HIMSS John E. Gall, Jr. CIO of the Year in 2017.

Highlights of his CIO positions include coordinating Meaningful Use efforts to maximize incentives totalling more than $5M, supporting multi-site telemedicine operations, and integrating biomedical technology functions into IT plans for integrated data and IoT security efforts.

Actively involved in healthcare information technology associations, Randy served four years on the CHIME Board of Trustees including one year as Chair and one year as Chair of the Foundation Board. He is actively involved in CHIME Public Policy and the CHIME Certified Healthcare CIO process. Randy has been recognized by CHIME with the Outstanding Service Award, the Federal Public Policy Award for CIO Leadership and the State Advocacy Award for CIO Leadership. He has Fellow and Life status with CHIME and is a certified healthcare CIO.

Randy has also been very active in HIMSS having served on the national HIMSS Advocacy Committee as well as serving eight years on the Kentucky Bluegrass HIMSS Chapter Board of Directors. He served one year as KY Bluegrass HIMSS chapter president and four years as the chapter Advocacy Liaison. Randy is a HIMSS Fellow and is the recipient of the HIMSS Founders Leadership Award.

Randy has also been active locally and at the state level. He is a co-founder of the Northeast Kentucky Regional Health Information Organization and has served on the Kentucky Health Information Exchange Coordinating Council. He has served on IT advisory boards at Morehead State University and Northern Kentucky University. Randy served five years on the Morehead Federal Credit Union Board of Directors.

Randy holds MBA and MSIS degrees as well as Bachelor of Business Administration in Information Systems and Bachelor of Science in Geology degrees.