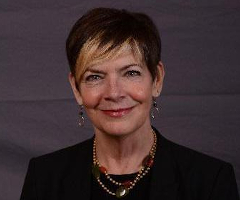 Diane Carr is an Advisor at StarBridge Advisors, LLC. Diane has extensive leadership experience in IT and operations working in hospitals and health systems in New York. She served from 2006 to 2016 as deputy executive director for operations at the North Bronx Healthcare Network, which includes two public hospitals, Jacobi Medical Center and North Central Bronx Hospital, as well as two community based health centers.  In addition to Information Technology, Diane had responsibility for planning, design and construction, supply chain, security, pharmacy, engineering and maintenance, environmental services and support services.  Her experience using technology to transform clinical and business processes is both wide and deep.

From 1994 to 2006 Diane was a senior executive at the Queens Health Network. The North Bronx and Queens networks are part of the New York City Health & Hospitals Corporation, one of the largest municipal healthcare systems in the country.

In Queens, Diane oversaw the implementation of an electronic health record to increase patient safety and information access at the network’s two hospitals, Elmhurst Hospital Center and Queens Hospital. During her tenure, the Queens network was the recipient of the 2002 Nicholas E. Davies Award for Excellence in computerized patient record implementation.

Diane began her career in healthcare at St. Charles Hospital in Port Jefferson, New York, where she was director of patient access services from 1992 to 1994.

Before entering the health field, she was chief of staff to a member of the New York State Legislature and Chief Deputy General Services Commissioner, a $52 million-a-year executive government department in Suffolk County, NY.

Diane has served on the HIMSS NA Board of Directors, and since 1998 has chaired a number of committees and represented HIMSS as a member of the HIT delegation visit to Israel in 2013.  For fiscal year 2017, she was selected Chair of the HIMSS NA Finance Committee.  Diane joined the faculty at Stony Brook University’s School of Health Technology and Management as Clinical Assistant Professor in Health Sciences in December 2015.

She is the author of several articles on electronic health records. Diane holds a masters degree in public administration from Stony Brook University in NY. She also attended Harvard School of Public Health’s program in health systems management.